Out of body at 9 years old 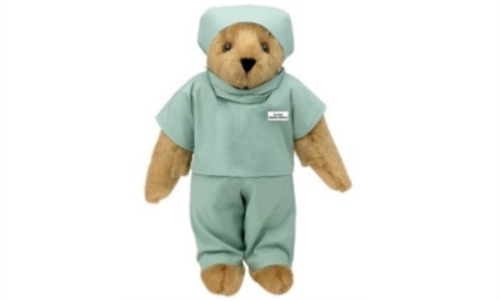 I was 9 years old and was having emergency major surgery to fuse vertebra in my spine.

I could see myself lying, shrouded on the operating table and there were other people in the room. Some of them were standing over me.I could hear music and a low, softly spoken voice of authority. The voice sounded like a man’s voice and I remember thinking that he sounded like Mr Kelly, my head teacher at school.

I drifted away from that thought and tuned in to the faint sound of some music I could here on a radio but I couldn’t quite make out what was playing.
It didn’t seem to matter that I couldn’t identify the music anyway because an inner thought had already moved me on to create a rhythm that merged this music with the bleeps from monitors in the room. I was enjoying this game. It was fun!

I felt no pain; just an excitement that maybe I was being abit naughty-getting away with eavesdropping on BIG PEOPLE’S conversation because I could see and hear them but was sure they had no idea of this.

So, there I lay… feeling completely relaxed but suddenly, the music was being drowned out by loud voices and noises and I started flying around the room to try and get a better view of what was happening to me.

I was on the operating table but I was no longer responsive. The bleeps were replaced with the sound of a continuous hum. They made a number of attempts to revive me but I was lost.

Shortly after this, a member of the medical team informed my mother that there had been complications but somehow, somewhere, ‘I’ was not done yet. A faint pulse had been pushing its way through and had left doctors perplexed but this was enough to have me rushed off to the intensive care unit for emergency observation without a moment to spare. I remained there in a critical condition for a number of days.

I learnt that I suffered a massive, life threatening reaction to a drug I was given during the operation and had quickly developed a condition called Malignant Hyperpyrexia.

Later in life, during a conversation with my mother, I found myself talking quite casually about what I experienced all those years ago. For a long time growing up, I had some idea that the operation caused problems but I didn’t know what these were and I was not sure how my account would be received by anyone. Would my story be thought about as ‘farfetched’ or a little crazy?

We continued talking and my mother got up and walked over to a cabinet where she looked through some papers, pulling out one of my old medical reports that detailed what happened. As I read the information, my mother looked at me and said “you are a very special child”.

For centuries, people have documented “Out of Body Experiences” or Astral Projections; where the spirit is said to leave the body and float above it on another plane.

OBEs can be caused by many different things; brain trauma, sensory deprivation and simple hallucinogenic for example.

Since my brush with death at 9 years old, the subject of OBEs has continued to fascinate me and even though Science and religions may have their own explanation about where or how OBEs are created I am of the opinion that each experience is triggered by different combinations of a whole event.

Surely, this must mean that every incident is unique and is therefore a journey into the complete unknown that cannot always be explained.

Did you know that…

The term out-of-body experience was introduced in 1943 by G. N. M. Tyrrell in his book Apparitions and was adopted by researchers such as Celia Green and Robert Monroe as an alternative to belief-centric labels such as “astral projection”, “soul travel”, or “spirit walking”. OBEs can be induced by brain traumas, sensory deprivation, near-death experiences, dissociative and psychedelic drugs, dehydration, sleep, and electrical stimulation of the brain, among others. It can also be deliberately induced by some.

One in ten people have an OBE once or more commonly, several times in their life.

So, what are your views?